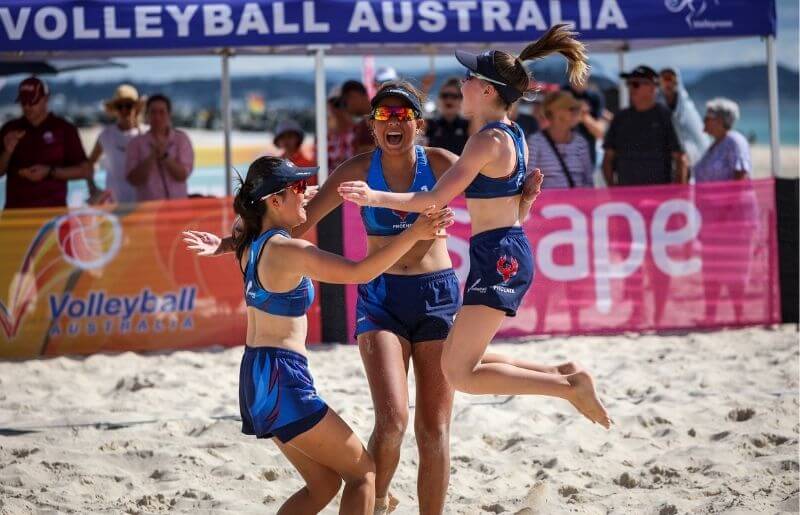 The BluescopeWIN Lonestar program has a strong contingent of Beach Volleyball players in the 2020/21 program, with all seven of these athletes selected to represent the NSW Phoenix at the Australian Youth Beach Volleyball Championship.

The athletes travelled to Coolangatta, QLD to complete in the National event from 26 to 29 April 2021.

IAS athlete Mireille Smith, teamed up with fellow NSW representatives Oriwia Noble and Remy Song to contest the U15 Girls event. After winning five of their six pool games, the NSW U15 Girls continued their winning form against QLD 5 in the quarter final, before beating QLD 1 in the semi final to progress to the much anticipated grand final against QLD 2. The NSW Girls fought had to win the gold medal 2-1 (22-20, 14-21, 13-15) and be crowned as National Champions.

In the U16 Boys, Adax Brienen finished in 4th place after going down to QLD in the bronze medal match.

The U17 Girls featured three IAS BluescopeWIN Lonestars, with Parri Barrele, Alexandria Smith, and Mali Towers all vying for a medal. Mali Towers and partner Lara Limbrick had a similar Nationals campaign to Adax Brienen, finishing in 4th after also losing to QLD in the bronze medal match. Alexandria Smith and Parri Barrele paired up for the tournament and made it through the 5th place play off where they took a 2-1 win to finish 5th in Australia.

IAS athletes, Malia Barrele and Kaia Brienen teamed up to contest the U18 Girls division and finished in 12th place.

“I’d Like to compete at a higher level and possibly play overseas as well,” Mali Towers said. “That would be an ultimate goal.”

A great week for our beach volleyball squad, well done!

Click here to watch Adax, Kaia and Mali’s interview before they departed for the Australian Championships (and see if you can spot some IAS singlets!).