Athletes do the IAS Proud at Academy Games 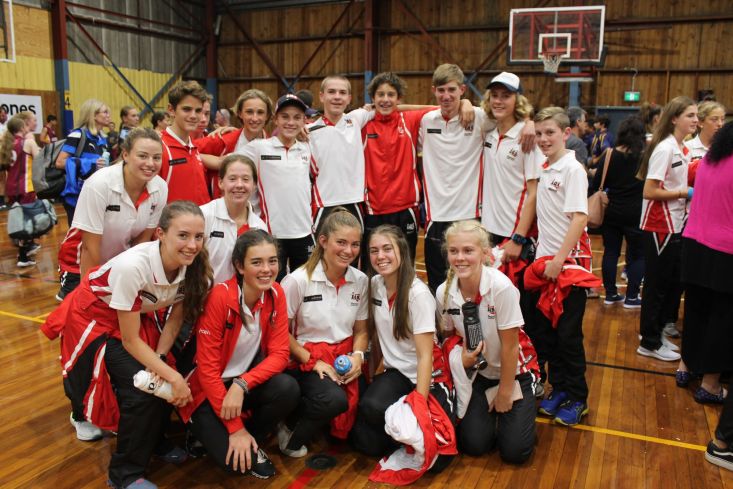 The Illawarra Academy of Sport has had a successful campaign at the 2019 Your Local Club Academy Games from 12-14 April. The Your Local Club Academy Games has been referred to as “the largest multi-sport junior event in Australia.” It showcases some of the state’s most talented emerging athletes across a selection of sports including Basketball, Golf, Hockey, Netball, Tennis, Softball, AFL and Triathlon.  Competing across these eight sports was eleven Academies of Sport, and over 1300 participants. The IAS boasted one of the largest squad’s at the Games, with over 115 athletes, coaches and staff in attendance.

But winners are not just measured by gold medals. The test was not just about the athletic performances. Collectively the IAS achieved some excellent results but it was the performances that did not yield the podium accolades that stood out. The exemplary nature of each individual athlete in the manner in which they carried themselves off the field provided inspiration to all. The unflinching manner in which the Triathlon crew prepared themselves for a 6:00am departure from the motel. The sharing nature of the golf parents to assist in transport. The enthusiasm with which the nutrition interns applied themselves to their task. One of the big winners were the Basketball crew. With the unselfish support from Manager Sue, both the Men’s and Women’s team were without an IAS coach and combined with others to form a hybrid team. Whilst most of them gave away height and age to their competition, they showed the tenacity and competitiveness that can only enhance their sporting success into the future. Whilst the scoreboard showed limited wins on the court, their capacity – and their fellow IAS athletes across all of the sports – to inspire, improve and challenge themselves will mark this Academy Games as an enormous success. Champions are often measured by how they perform when they are not winning and each of the 80 plus athletes have done all they could to enhance the reputation of the IAS.

As is so often the case – we cannot succeed without strong support from others and the support provided by Premier Motor Service for supplying us with three buses for the weekend and to Kellogg’s for supplying breakfast for our athletes cannot be undersold. So too the support provided to the athletes by the coaches, managers, IAS administration and parents – it is all appreciated!

The IAS Triathlon Squad have proved they are a force to be reckoned with after a strong weekend of racing at Your Local Club Academy Games. The Triathlon took place at Cams Wharf, Lake Macquarie over a testing, fast, technical course that was sure to challenge the athletes. It was a draft legal race to give the athletes a taste of draft legal racing within an environment where every athlete was of a similar standard.

Across the weekend there was four races – two team races and two individual races. The times from each race was added together to give the athletes a total time for the weekends racing, with the winner having the fastest time.

The racing was intense, fast and great to watch in every category with some outstanding athletes coming to the forefront to take the placings.

Unfortunately on the last race of the day some of the boys in Youth B came in off the bike a lap short which consequently saw them register a DNF and resulted in Joel Offord missing out on the podium.

The atmosphere at the race was fantastic with all the IAS athletes supporting each other and pushing them all the way to the end of each race.

A special mention must go to the IAS Triathlon Coach, Brendan Sexton, who provided constant support, advice and feedback to all the athletes throughout their weekend. Clearly what the athletes are doing with Brendan is working.

From a starting draw of 64 players, IAS LoneStar tennis player Ryan Fleming fought his way through the Academy Games draw to be one of the final 16 players. After his strong round matches, he bowed out to the number 1 seeded player on the second day of competition. For Ryan and the other tennis competitors, Academy Games was a 3 day tournament starting at 8.00am on Friday morning at District Park Tennis Centre in Newcastle.

Being the only tennis player representing the IAS, Ryan finished 2nd overall in the U14 draw at Your Local Club Academy Games!

The IAS may have been short on numbers due to the Australian Junior Age Championships being on at the same time but that didn’t stop us from getting both our athletes on the Academy Games podium. Saturday saw the athletes complete the Pacific Dunes Golf Club course and on Sunday at Belmont Golf Club, both days results were then combined for the overall standings. Both of our athletes had a strong tournament, with Daniel Marsden winning the Male NETT with a total NETT over the two days of 144 and Sienna Clarke finishing runner-up in the Girls NETT having a total NETT of 157.

The IAS AFL Girls have kicked some major goals at Your Local Club Academy Games finishing in 5th place out of 9 Academies, with 2 wins and 2 losses! Coming into Academy Games our U16 AFL Squad was ranked last and was aiming to get a win on the board to improve on last years results.

Day 1 started with a tight 6-6 first half against one of the top teams, SWSAS. Despite some enthusiastic efforts from the IAS, SWSAS proved too strong and sadly we went down in the second half. This wasn’t stopping the determination for the squad and they bounced back in Game 2 with a strong win against Hunter 31-19; the IAS’ first ever win at Academy Games AFL!

High on adrenalin from their maiden win, the IAS girls convincingly beat the combined SSA/NIAS/NCAS team 34-13! Day 2 saw another tightly contested, low scoring game against WSAS/WRAS with the IAS leading majority of the game. The game went right down to the wire with the IAS leading 8-7 with a few seconds to go, unfortunately a late WSAS/WRAS goal on the buzzer saw then take the win from the IAS 13-8.

Coach Ben Hyndes and Manager Nicci Kennedy were proud of the entire IAS squad’s improvement throughout the carnival, attitude, and how they stepped up to produce outstanding team efforts finishing with 2 wins and 2 close losses. Congratulations to Grace Hughes, Alyssa Abbott and Georgia Genner on standout performances during the tournament.

The Your Local Club Academy Games Hockey tournament was fiercely competitive in both the male and female divisions, with our girls taking home the Bronze medal.

Throughout the weekend both teams encountered some nail biting matches across the rounds, with a mix of wins, draws and close losses.

Academy Games is the perfect opportunity for up-and-coming athlete’s to test their skills against similar opposition. The IAS Boys produced moments of brilliance in a tough competition, whilst constantly doing the Academy proud with their attitude to succeed. After tough rounds and play-offs, the IAS Boys finished in 6th place after losing their play-off 3-1 against a combined SWSAS/CCAS team. Special credit to Saxon Perry named as IAS MVP and in the Academy Games Merit Team following his outstanding performance over the weekend.

In the girl’s division the IAS and Northern Inland Academy of Sport (NIAS) merged together to form a competitive team. After starting the competition on Saturday learning team cohesion and playing to each other’s strengths the girls went on to grow throughout the weekend and finish in an admirable 3rd place! Montana Stamp had an excellent weekend in goals, being instrumental in the team’s success and gaining herself a selection on the Academy Games Merit Team as IAS MVP.

Netballers Take on the State’s Best

It was a gruelling weekend of netball for the IAS Netball Squad, showing off their skills against the best of the state’s up and coming talent. The IAS was well represented with a team in Division 1 and Division 2, along with three umpires. Your Local Club Academy Games Netball Tournament was held at Maitland Basketball Stadium and focused on player and umpire development in an elite sporting environment, opposed to concentrating on the competition ladders. Following the tournament two Merit Teams are selected, big congratulations to Kate Meurant (Division 1) and Gabby Eaton (Division 2) on their selection! A further congratulations to umpire Sophie Eardley on gaining her National C Badge.

Throughout the tournament our Division 1 team won five of their ten games and the Division 2 team finishing with two wins and two draws out of their eight games, with both teams only going down by a couple of goals in the other games. The IAS Coaching staff were impressed with the entire squad’s effort over the weekend despite missing a few key players due to other representative duties.  It was also great to see the athletes putting into practice the skills and tactics learnt at the Netball NSW High Performance Camp in March.

Basketballers up against the big guns

Never giving up was the attitude our basketballers took into and throughout Academy Games; our squad showed that what they might have lacked in size they made up for in enthusiasm. The IAS combined with Hunter for both the male and female basketball competitions to ensure we were able to compete and have enough players on the court.

The Illawarra girls started the tournament with a thrilling overtime encounter against Central Coast. Throughout Saturday the girls grew in team cohesion and confidence and finished the rounds with 2 wins and 1 loss. The IAS girls went into the quarterfinal high on confidence after a successful day and managed to just scrape in with the win against Hunter 49-48 to put themselves through to the semi. The semi saw the IAS take on a very strong Central Coast outfit, unfortunately after a demanding weekend couldn’t take the win over them.

The IAS boys also started their Academy Games campaign against eventual champions Central Coast, where they showed they are a force to be reckoned with by holding their own against the much older, bigger opposition. As the competition continued the IAS and Hunter boys continued to gel and produce some great basketball! Sadly, they lost their quarterfinal against Hunter and playoff against South East Sports Academy.

To view photo’s from the 2019 Your Local Club Academy Games click on the article titles above or visit our Facebook page.