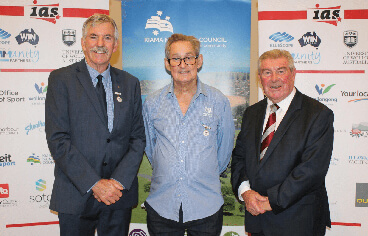 The Illawarra Academy of Sport is deeply saddened by the death of Peter Bowman, a Life Member, and long serving Director and Member of the Academy.

Peter joined the IAS Board of Directors in November 1995 when he was nominated to be the representative of the Executive Director of the Australian Institute of Sport, a Foundation Member of the IAS. Peter continued to serve on the IAS Board and a variety of sub-committees for the next 25 years until his death on 12 July 2020.

Peter left a legacy of having made a significant contribution to developing a pathway for the region’s talented, young athletes and encouraging them to live by sport’s enduring values, including fair play, respect, sportsmanship, and winning or losing graciously. He was instrumental in contributing to the Academy’s operations, governance and policies. Peter was a strategic thinker, with his experienced background in accounting playing a huge role in providing insights and advice in relation to the Academy’s financial position. He was also an influential member of the IAS Risk, Finance and Audit Committee.

On 13 February 2020 Peter was awarded Life Membership of the Illawarra Academy of Sport, in recognition of his tremendous contribution and service.

Sport was Peter’s passion, in particular the sport of Athletics, and this led to him becoming one of Australia’s leading sports administrators. Peter contributed to all areas of sport, including managing a variety of IAS Athletics and Swim teams, coaching numerous State and Australian champions, and serving on numerous boards, committees and commissions, including four years on the inaugural board of the Victorian Institute of Sport .

Peter was the Director of Sport at the Australian Institute of Sport from 1981 to 1987, working along the foundation Executive Director, Don Talbot, he was at the forefront of establishing the AIS.

Having retired to Kiama, Peter was elected as a Councillor of the Kiama Municipal Council and served from 2008 to 2012.

Peter’s advice, friendship and love for sport will be sorely missed by the sporting community.

On behalf of the Illawarra Academy of Sport Board, Staff and Athletes we would like to pass on our condolences to Peter’s wife, Pamela, and family, as well as the many friends and colleagues that have known Peter through his outstanding involvement in sport.