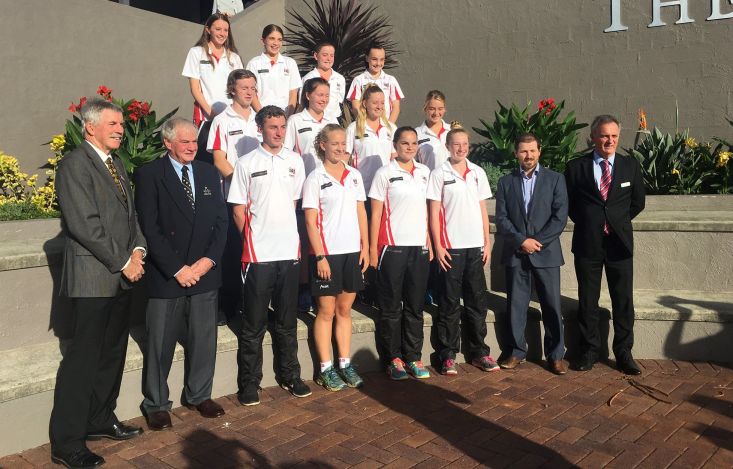 The Mayor of Kiama Municipal Council, Cr. Mark Honey officially recognised the Academy Scholarship holders from the Kiama Council area at a reception held in the Kiama Showground Pavilion on Thursday 9th March 2017.

The Mayor congratulated the athletes who were representing their community with distinction and spoke of how great it is at this time to see Academy graduates who once previously sat at a Mayoral Reception just like them, achieving such great results at the highest levels.

Olympian, IAS Graduate and Kiama resident, Grace Stewart sent a message to the athletes via video expressing her gratitude to the Academy and to remind current athletes “to take it all in and keep working hard” adding that “at the time you may not think the education is that important but it makes a massive difference as you progress through the system if you have been exposed to it at the academy”.

Talented Netballer Georgia Deen responded on behalf of all athletes in thanking Mayor Honey, the IAS and their staff and explained how the Academy has assist her in pushing herself further in pursuit of higher honours.

The Academy has a close relationship with all five Illawarra Councils, Kiama, Shellharbour, Shoalhaven, Wingecarribee and Wollongong, and the receptions are a strong demonstration of the links between the IAS and local government in the region.

The Illawarra has a rich history in developing and elevating athletes to higher representative honours, with the Academy a significant vehicle in the process. Over three decades, the IAS has supported more than 5300 young people from across the region in their pursuit of sporting excellence.