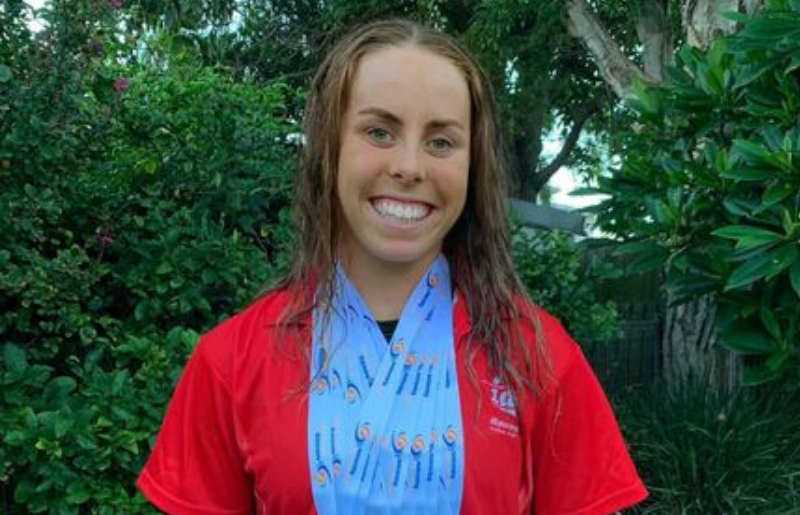 Chelsea Jones has achieved remarkable results over the past 12 months in both swimming and surf lifesaving, winning five National medals across both sports in 2021.

In surf lifesaving, Jones was a member of the NSW Open Super Surf Team. At the NSW Surf Championships, she won three gold and two silver medals, and then went on to gain two bronze medals at the Australian Surf lifesaving Championships on the Sunshine Coast in April 2021.

The 16-year-old had a phenomenal year in swimming at both a State and National level, leading to her selection in the Swimming NSW Performance squad.

Jones put on a classy display at the Australian Age Swimming Championships, where she secured silver in a blistering 50m freestyle and narrowly missed out on a medal in the 100m freestyle to finish fourth. Jones and her Wests Illawarra relay team became National champions when they won gold in both the 4x50m and 4x100m freestyle relays, breaking NSW and QLD all-comer records.

At a state level, Jones won four gold medals at NSW All Schools, breaking the NSW record in both the 50m and 100m freestyle events. At the NSW Country Championships she continuing to write her name in the record books when she claimed the NSW Country record in the 400m freestyle and won three gold and four silver medals. She continued her form and won four gold and three silver medals at the NSW Championships, and broke the 4x50m freestyle record with her Wests Illawarra relay team.

Being a talented athlete in a range of sports, Jones has been in the Illawarra Academy of Sport since 2018 as part of the BluescopeWIN Lonestar and Netball programs. She is not only the ultimate competitor but also a humble, selfless sportsperson and community member, regularly giving up her time to help others. She is a volunteer lifesaver and junior coach at the Bulli Surf Life Saving Club, and a volunteer timekeeper at West Illawarra Aquatic Swim Club.

“Chelsea has been a fantastic ambassador for the Academy over the past few years, and espouses all the values of the IAS,” John Armstrong, IAS CEO said.

“This talented athlete has a big future ahead of her and we look forward to watching her progress, emulating the Tobin Award winners and swimmers from the IAS that have gone before her.”

The DRB Group Tobin Family Award is given to the Academy athlete who, during the course of their scholarship, displays an exceptional level of sports performance, a commendable attitude to competition, persistent dedication to learning and strong community focus.

2021 is the 20th year the award has been presented with previous winners including Tokyo Olympians, Emma McKeon, Blake Govers, Sally Fitzgibbons, Sarah Carli, and Kieran Woolley. The recipient of the award receives a trophy and a $5000 scholarship, sponsored by the DRB Group to assist in their continued development within their chosen sport.

Congratulations goes to the Athlete of the Year winners announced during the 2021 IAS Virtual Awards Night;