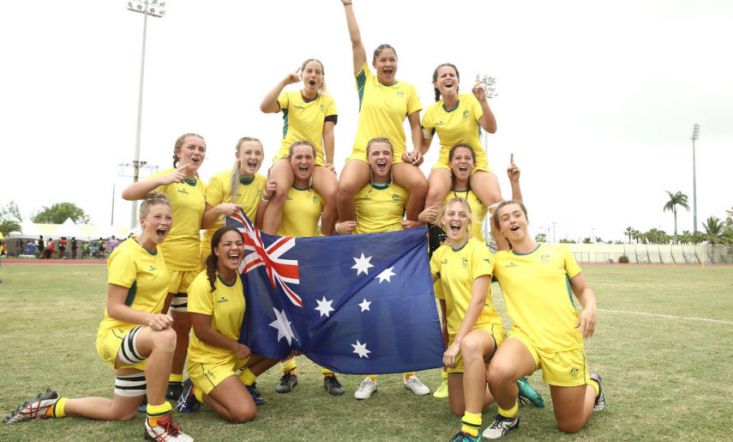 The five-day international sporting event was held in the Bahamas from 19 – 23 July and offered the opportunity for all 70 Commonwealth Nations and Territories to harvest the next generation of star athletes.

The IAS was well represented with two athletes in Abby Homes (Rugby 7’s) and Mitchell Wright (Cycling) and one Coach in Mick Marshall who was the Cycling Head Coach.

Holmes and the team entered the gold medal match against Canada undefeated after the pool rounds, beating Bermuda 60 – 0, Trinidad & Tabago 62 – 0, Fiji 41 – 5, Wales 26 – 0 and Canada 24-17 with an impressive 213 for and 22 against. While the girls had easily disposed of their competition, the gold medal was far from theirs, needing to once again defeat Canada who pushed them in their final pool match with only 1 try separating the two teams.

In the Gold Medal Match the Australians burst out of the blocks with an early try, to which the Canadians answered soon after. In a tight first half which was end to end, Australia scored a second try just prior to half time to take a 12 – 5 lead into the break. In the second half it was all Australia, running in 3 tries to seal the Gold Medal with a dominant 31-5 result.

In the Cycling, Mitchell Wright mixed it with the world’s best riders in both the Time Trial and Road Race. Set on the flat streets of New Providence, the course was set for the sprinters, however this did not deter Wright, who pushed his body to the limits in the hot and humid conditions in the time trial to finish 8th in a time of 12:30s, 24 seconds behind the winner from Bermuda. With only 1 minute separated the top 20 riders, a sign of the competiveness of the competition.

Mitch then backed up from the time trial to race in the Road Race on the final day, with the riders completing 7 laps of the Time Trial course. Again, the sprinters were in the box seat with a number of attacks early, with a 4 man breakaway on lap 4 being able to stay away from the pleaton to ride to a sprint finish. Wright finished at the front of the Pelaton, 1:06s behind the breakaway in 12th, as the best place Australian.

The games were also a huge success for IAS Cycling Coach Mick Marshall, who guided the Australian team to 3 medals with Madeleine Fasnacht picking up Gold in the Women’s Time Trial and Bronze in the Road Race and Sebastian Berwick winning Bronze in the Men’s Time Trial.

Congratulation to Abby, Mitch and Mick who all represented the IAS, Illawarra and Australia with distinction, which is only a sign of the things to come from 3 extremely talented individuals.