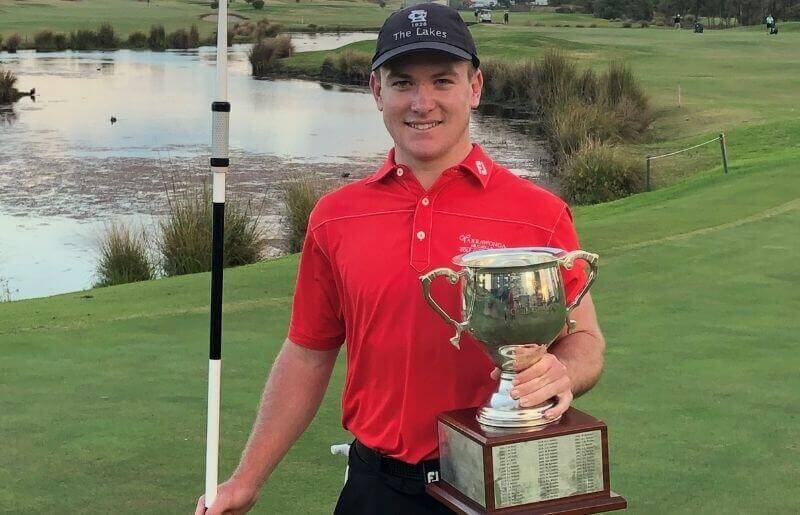 Saturday 1st May 2021 was the final Round of the Wollongong Golf Club Men’s & Junior Club Championships.

Going into the final round Ethan Harvey was T2 with two other competitors and 8 shots behind the experienced leader Stephen Webb.

Over the front 9 holes, Ethan had picked up 2 shots to be 6 behind after shooting 34, 1 under in tough conditions.

It was the last 9 holes where Ethan applied the pressure with Birdies on the 10th & 11th holes. The 11th hole being a Par 4, Ethan drove the green to set up an easy 2 putt Birdie.

At this point after 11 holes Ethan was now only 2 shots behind and applying real pressure. The main turning point came at the 13th & 14th holes where Stephen had quadruple boggy on the 13th and a boggy on the 14th where Ethan parred 13 and birdied 14 to now be 4 shots in front of Stephen. Both players parred the 15th hole.

With 3 holes to play Ethan knew that Stephen wouldn’t give up and he had play smart coming home. Ethan boggied the 16th hole now to be only 3 shots ahead. On the par 3, 17th hole Stephen nearly slammed dunked his tee for an ace which lead to an easy tap in birdie. Ethan had a 2 putt par to be now only 2 shots in front.

The 18th hole being a reachable par 5, both players hit great tee shots and were in range to reach the green in two. Stephen played his second shot first to the front edge of the green. Ethan knowing he also could reach the green in two, decided to layup and have an easy pitch shot for his third shot taking all the trouble out of play. It took all of Ethan’s caddie’s strength to convince him not play for the green in two.

Ethan hit his pitch shot to the middle of the green. Stephen next to play putted his third shot within 3 feet of the hole. Ethan played his fourth shot to within 2 feet. Stephen then made his birdie putt, putting all the pressure on Ethan to make his par putt, which he did to win by one shot.

The final round was witnessed by some 50-60 members following the final group all day, adding to the excitement and pressure for all players. Stephen shot 76, 6 over par and Ethan shot 67, 3 under par.

“Ethan showed maturity beyond his 17 years of age with his Golf Game and Metal Attitude” which was one statement for former IAS Coach Greg Kerr.