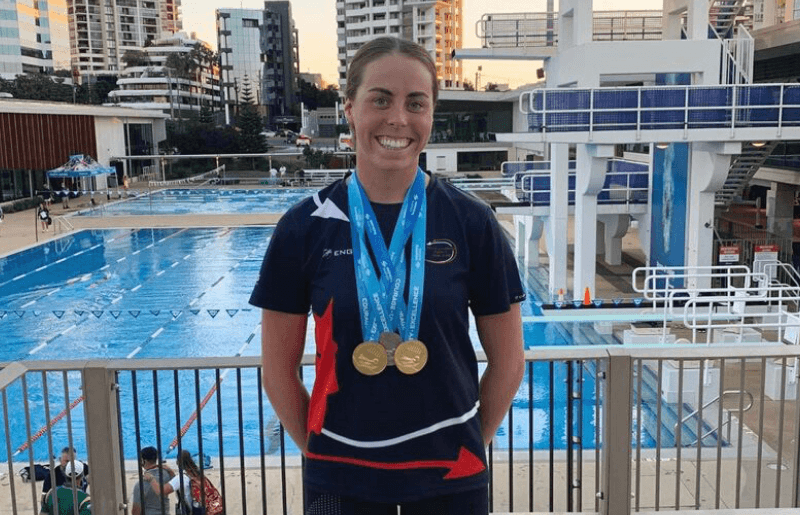 Eleven Illawarra Academy of Sport athletes completed their stellar season in the pool at the 2021 Australian Age Swimming Championships in the Gold Coast from 5-12 April.

Rising star, Chelsea Jones continued her success in the pool making the finals in all five individual events and claiming silver in the hotly contested 16 Girls 50m Free. Chelsea was crowned National Champions with her fellow Wests Illawarra teammates in both the 4 x 50m Freestyle Relay and 4 x 100m Freestyle Relay.

Talika Irvine raced her way to three finals out of five events and gained a bronze medal in the 14 Girls 400m IM, after narrowly missing a medal to finish 4th in the 200m IM.

“I am so happy to have reached another goal of mine, which was to place in the top 10 of Australia, but go one better and medaled,” Talika said.

Ivy Miller had an outstanding meet in the Girls 13 age group, racing the finals in the 200m Fly and 400m IM, and making eight PBs in nine races.

Further congratulations goes to past IAS swimmer, Sydney Brown who picked up two golds in the 4 x 50m Free Relay and 4 x 100m Free Relay, silver in the 16 Girls 100m Free and bronze in the 50m Free.

Well done to all IAS BluescopeWIN Lonestar, AWD and Swimming squad athletes on fantastic achievements, you have done the IAS proud!