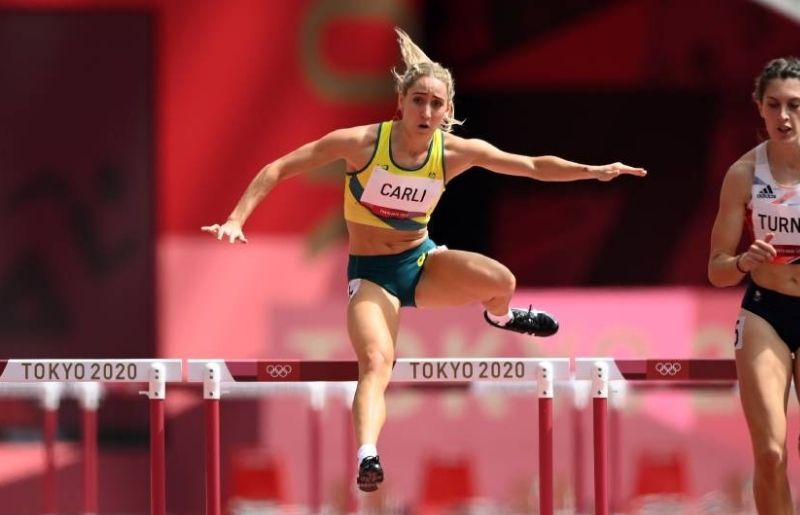 To make the start line of the 400m Hurdles at 2020 Tokyo Olympic Games is an unbelievable achievement for Sarah Carli after suffering a life-threatening injury in the gym in February. Sarah’s incredible journey of sheer determination and strength epitomises the true Olympic spirit and values.

“I’ll always be proud of how hard I fought to get to that start line. Being an Olympian is the pinnacle of sport and to know that I’ve reached that point is fantastic,” Sarah Carli told the IAS.

Sarah ran a season’s best time of 65.93, narrowly missing out on the semi-final by a mere one tenth of a second.

“I had to give myself the best shot, but I didn’t quite have it in my legs,” Carli said after her Olympic debut. “I just don’t have the fitness behind me. I’ve only had 6 weeks of full training, and my first race 4 weeks ago so the time I did is quite good considering.”

In February Sarah slipped doing a step up in the gym, initially only going to the hospital as she had split her chin open. Luckily she did this as she had a seizure in emergency, doctors immediately did a CT scan which revealed she had dissected her carotid artery. Within 20 minutes doctors had Sarah in emergency surgery, taking a vein from her thigh to repair the artery and preventing a stroke that would have been fatal.

With the injury being so rare, doctors didn’t know what the recovery would look like or how long it would take. It soon seemed like Sarah Carli’s Olympic dream was over for Tokyo, despite already having achieved an automatic qualification time of 55.09 in December 2020.

Carli defied all odds and the race against the clock to be fit enough to compete at the Olympics in the 400m Hurdles. With the setback has making the 26-year-old even more determined for Paris 2024.

“100% I’ll be back,” Carli told Channel 7. “I know it sounds cliche but when things like this happen it really makes you think about what’s important and to me it’s my athletics.”

“Give me 3 years with that mentality and see what I can do.”