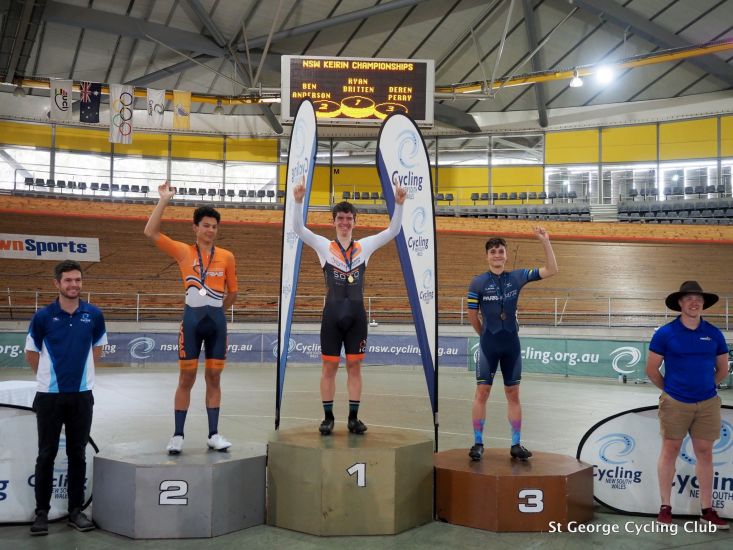 It was another successful weekend at the track for IAS Cyclists during the 2020 Cycling NSW U15 & U17 Track Championships held at the Dunc Gray Velodrome from 28 February to 1 March. Ryan Britten, Sarah Cliff, Jonah Hamer, Hugh Sessini, Emily Strumfin and Curtis Trkulja represented the IAS superbly in the Under 17s, hauling in nine gold medals, one silver medal and four athletes being named in the NSW team.

Ryan Britten stepped up to a new level at the Championships, taking a clean sweep of the track by winning gold in all six of his U17 Men’s events. A phenomenal achievement from this cycling sensation, well done Ryan!

Sarah Cliff followed in Ryan’s footsteps and rode her to gold in the U17 Women’s Scratch Race, Points Race and Individual Pursuit, and took silver in the Time Trial.

Emily Strumfin narrowly missed out on the podium, finishing 4th in the Scratch Race and 5th in the Individual Pursuit and Points Race. Jonah Hamer finished in 5th place in both the Points Race and Individual Pursuit, nailing a huge PB in the process. Curtis Trkulja and Hugh Sessini rode to some top 10 placings in a strong field, with Hugh impressively making the Keirin final in his State Championships debut.

Rewarding the IAS Cyclists for their State Championships success and a great weekend of racing, Sarah Cliff, Emily Strumfin, Ryan Britten and Jonah Hamer were selected in the NSW Under-17 team. The NSW team will compete at the Cycling Australia Junior Track National Championships in Brisbane from 18-22 March 2020, with Emily and Jonah set to make their track national debut. Well done!