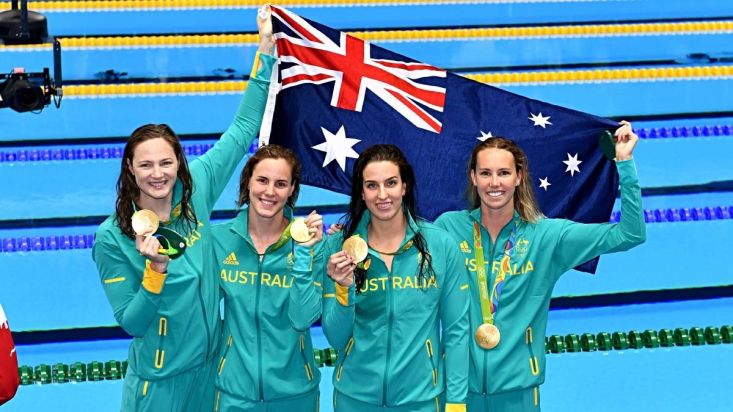 Illawarra Academy of Sport’s swimming star Emma McKeon secured the Illawarra’s first gold medal of Rio 2016 in Australia’s world record breaking 4×100 freestyle relay victory. McKeon led out the national team’s stunning triumph in the pool on the opening day of the Olympic Games. In her first Olympics, the 22-year-old got Australia off to a solid start when she swum the first 100m in 53.31 seconds to stay in touching distance of leading United States. Brittany Elmsie’s second leg kept the Australian team on track before the Campbell sisters, Bronte and Cate, swum right over the top of their biggest rivals in the pool. Bronte’s stunning third leg had Australia in the lead and on-track to break the world record mark. Cate then showed why she is one of nation’s best individual medal hopes at the Games with a dominant final leg which saw Australia clock a time of 3:30.65. The United States came home for silver and Canada got bronze. The gold was Australia’s second at the Games and McKeon’s first at her maiden Olympics. “It was so much fun,” McKeon said. “I think being in the marshaling area with these girls makes you more relaxed because at this big meet you get so worked up. But that was so much fun being out there with these girls.” Earlier in the evening, brother and fellow IAS Graduate, Dave McKeon finished seventh in the final of the men’s 400m freestyle. Fellow Australian Mack Horton won the event to give the nation our first gold in Rio. In other sports, Shellharbour born Matildas Caitlin Foord and Michelle Heyman kept their medal dreams alive in a hard-fought 2-2 draw with Germany. Foord scored a crucial goal just before half time to have Australia on track for victory, but the German’s scored with two minutes remaining to nab a point. Hockeyroos duo Grace Stewart (IAS Graduate) and Casey Sablowski suffered a setback in a 2-1 loss to Great Britain in their opening match of the tournament. First Published in