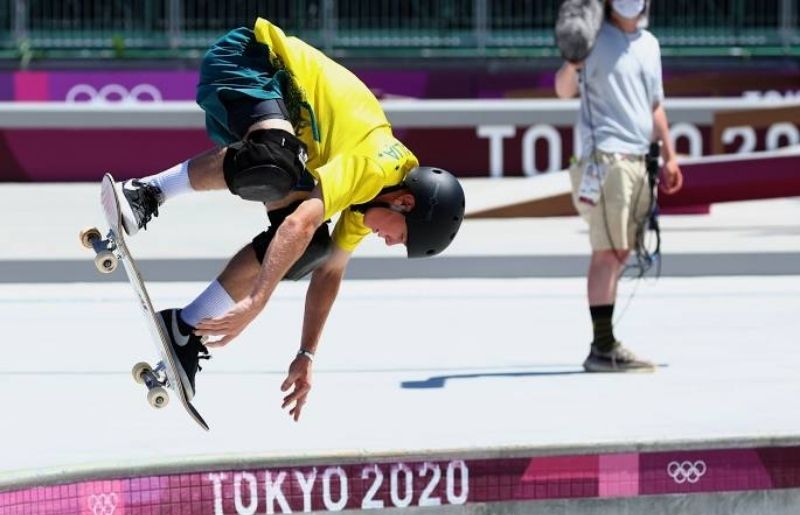 Kieran Woolley made his mark on the international sporting scene after performing and skating with maturity beyond his 17 years in his debut Olympics. Woolley went into the event ranked 24th in the world and finished 5th in the world in skateboarding’s inaugural Olympic Games.

The Illawarra Academy of Sport BluescopeWIN Lonestar Kieran Woolley stole hearts around the country with his incredible first heat run and outstanding sportsmanship throughout the competition.

Kieran commenced his Olympic campaign soaring into medal contention with a phenomenal run to score 82.69 and a memorable crash into a camera man.

Showing his incredible sportsmanship, Woolley was quick to check the camera man was okay.

Woolley’s outstanding heat run of 82.69 was enough to booked him a place in the finals in second seed.

After scoring 82.04 in his second run in the final, the Kiama local was sitting in fourth position leading into the final round.  Having nothing to lose, Woolley attempted one of the biggest tricks in his repertoire to start his final run. Despite the trick not coming off, Woolley impressed viewers by getting back up and showing his tricks to finish off his run even though it wouldn’t count towards the points – displaying the true spirit of skateboarding.

As youngest competitor in the field and one of the youngest on the overall Australian Olympic Team, Kieran Woolley finished with a score of 82.04 in 5th place after Brazil’s Luiz Francisco produced an 83.14 on the last run of the final.

“It was a dream come true, I just went as high as possible and as fast as possible, I’m stoked all my friends killed it,” Kieran Woolley told Channel 7.

“We are so proud of Kieran, he is a true ambassador of the Illawarra Academy of Sport, the local community and the country,” IAS CEO, John Armstrong said. “How Kieran performed and conducted himself was remarkable. 5th place at an Olympics games is truly phenomenal!”