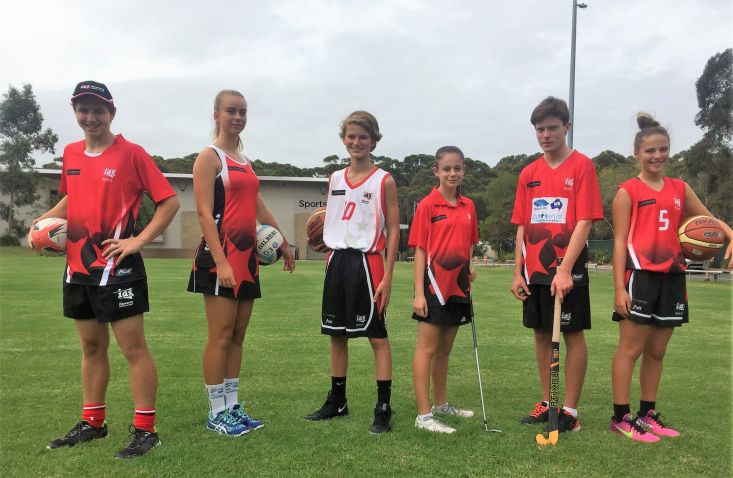 The Illawarra Academy of Sport converged on the Central Coast of NSW with a squad of 113, the largest to compete at the ClubsNSW Academy Games in recent years. Competing in seven sports including golf, hockey, triathlon, rugby 7’s, netball, basketball and tenpin bowling, the IAS were well represented amongst the medalist.

Four academies from across the state battled it out over the two-day tournament which was consisted of six rounds and finals.

The Girls squad remained undefeated throughout the tournament to claim the gold medal scoring an impressive 116 points (22-trys) for with only 5 points (1-try) against.

The boys team, while unable to emulate the success of the girls, did remain highly competitive throughout the competition after several strong performances including against eventual winners Northern Inland Academy of Sport.

IAS Rugby Sevens Head Coach, Tony Leader-Smith expressed is satisfaction with the squad’s performances across the tournament saying, “both squads competed really well in what was a strong competition”

Rugby Sevens is the fastest growing sport in Australia and in 2016 rejoined the Olympic Program at the Rio Games. Rugby Sevens is a perfect fit for the Olympic Games; it reinforces the Olympic movement’s ideals thanks to its longstanding ethos of fair play and friendship while the vibrant and exciting format of Rugby Sevens appeals to both existing followers of the sport and a wider sports-loving audience worldwide.

Aspiring young golfers from across regional NSW converged on the NSW Central Coast over the weekend (8th – 9th April) to participate in the Annual ClubsNSW Academy Games.

The IAS fielded a team of six talented golfers who produced some outstanding results and claimed four achievement medals.

In the teams challenge the IAS team of Luke Taylor, Kelsey Bennett, Eddie Ward and Ethan Harvey claimed the bronze medal with a point tally of 599, only 2-points of silver and 18-points of gold.

Kelsey Bennett was the most successful player in the squad that travelled away for the games. Bennett won the two-day event off scratch by an impressive 11-shots scoring rounds of 81 and 80.

The boys were not to be outdone however, with Luke Taylor claiming silver off scratch, only 2-shots behind tournament winner after shooting two impressive rounds of 78 and 72.

IAS Coaching Coordinator and JNJG Territory Manager Luke Grinham praised the vent and said “Overall this event was great for our Athletes to test their skills on two very challenging courses. It was also a very good team-building event as the Athletes do not get a chance to travel away as a team in their sport very often. This opportunity helps to build relationships and allows the players to learn in a friendly environment while having a great time”

SIX academies from across the state battled it out in a fierce hockey competition over the weekend at the 2017 ClubsNSW Academy Games.

The round robin tournament in both the girls and boy’s divisions was fiercely competitive, with each of the six academies in contention over the course of the weekend tournament.

The IAS BlueScopeWIN Hockey squads were without a number of players who were on representative duty however still managed to be competitive across the weekend with the boy’s team claiming the bronze medal.

It has become customary for a Merit Team to be selected from the Games. The IAS squad had two athletes selected into this squad being Hayley Rieck & Sage McAteer.

Sunshine, clear skies and a slight breeze made the conditions perfect for the triathlon competition at the 2017 ClubsNSW Academy Games.

The Triathlon events were both a mix of skills training and competition with all athletes gaining skills and knowledge from the weekend’s events.

Saturday, athletes from three academies took part in an open water swim clinic at Toowoon Bay. Shortly after, athletes made the trip to Mingara, where they were straight into the cycling clinic to work on their skills and showcase their talent in the second leg of the triathlon event.

These clinics were organized with the intention of increasing the athlete’s skills and preparing them for the final triathlon event on Sunday morning.

After a physically demanding weekend of swimming and cycling clinics, athletes made their final preparations before they jumped into the triathlon at Summerland Point.

Both the boys and girl’s events were hotly contested by all athletes from the academies, with IAS Athlete well placed amongst the medals.

In the long course (junior) it was also silver and bronze respectively for IAS Athletes Grace Mahan and Jacinta Cliff while Liam Hinchcliffe claimed the boy’s bronze.

It was a big weekend of netball on the Central Coast (8 & 9 April) providing the IAS netball squad an opportunity to apply their skills against the State’s other 12 Regional Academies of Sport and their up-and-coming netballers. IAS contested in two Divisions at Niagara Park Community Centre and Central Coast Grammar School.

The purpose of the weekend is to provide young emerging talented netballers and umpires with the opportunity to take part in a nine-game competition giving them first-hand insights into the skills, knowledge and personal attributes needed to develop in an elite sporting environment.

The ClubsNSW Academy Games is considered the ‘friendly games’ where competition tables are less important and athlete involvement and development are the priority.

While the Illawarra Academy of Sport were unable to enter a stand-a-lone team at the 2017 ClubsNSW Academy Games because of a late change in the age eligibility, six ballers who did meet the requirements competed in a IAS-SWSAS combined team under the coaching of IAS Basketball Head Coach and Illawarra Hawks player Rhys Martin.

The combined team struggled early with cohesion as not only was this the first time this group would compete together, for most they met for the first time in their pre-game shoot around. After being defeated heavily in their first match against tournament heavy weights Central Coast, they improved significantly throughout the tournament.

Head Coach Rhys Martin was full of praise when asked how he though the IAS athletes went, saying “while hard early with not even knowing their team-mates names, I thought they came together really well throughout day two and started playing some good ball”

Two All Star teams were also selected at the 2017 ClubsNSW Academy Games. Congratulations to first year scholarship holder Zoe Roulston who was selected in the girls All Star 5 after several strong performances over the demanding weekend.

FIVE academies from across the state battled it out in a fierce tenpin bowling competition over the weekend at the 2017 ClubsNSW Academy Games. The IAS were represented by two of the region’s leading bowlers Zowie Dreghorn and Samuel Sutton.

Bowlers competed in three divisions including singles, doubles and teams over the two-day tournament. The competition format was more suited for the academies with four or more bowlers however the IAS made the conscious decision to use this competition as a development tool with a focus on the technical process.

The athletes set a number of goals around reading the oil patters, identifying issues and subsequent changes that needed to be made and had a real focus of their mental performance. The development was evident in both Zowie and Samuel who bowled above their personal average on the Sunday.