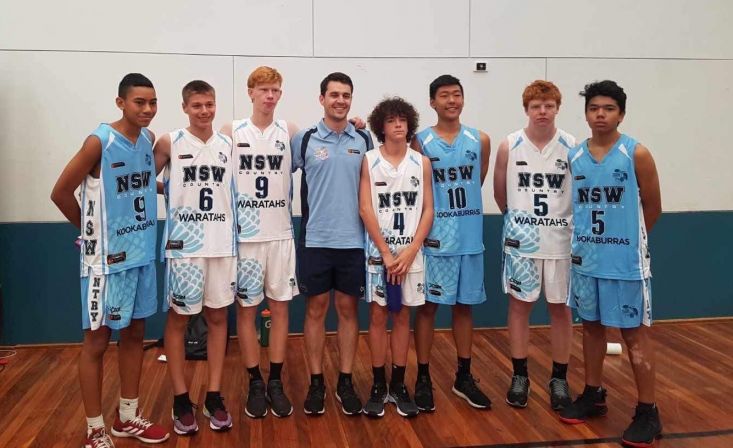 Our basketballers have started the year in fine form with over 13 IAS BluescopeWIN Basketball squad members representing NSW at either the Australian Country Junior Basketball Cup or the Southern Cross Challenge.

A contingent of IAS Basketballers headed to Albury, NSW from 11-18 January 2020 to represent NSW Country at the Australian Country Junior Basketball Cup (ACJBC). Since starting in 1985, the competition has grown in both size and standard with now over 60 teams attending from Australia, New Zealand and Fiji.

Tobias Delaney and Mason Broadhead (NSW Waratahs) took home the Silver medal in the U16 Boys competition, narrowly going down to the Victorian Goldminers by a mere 4 points. Judah Kami and Ben Lu (NSW Kookaburras) won the U16 Boys Bronze medal, after beating the Victorian Bushrangers 53-52 in the final.

In the U16 Girls division, Amelia Cotter (NSW Waratahs) and Imogen Thompson (NSW Kookaburras) went head to head in the bronze medal match. After a tough contest, Amelia and the NSW Waratahs beat the Kookaburras by 4 points to bring home the bragging rights and bronze medal.

Mason Broadhead and Amelia Cotter’s strong tournament performances led to their well-deserved selection in the Australian Country teams. They will travel to NZ over Easter to compete in the Mel Young Easter Classic. Good luck Mason and Amelia!

The basketball action continued in Melbourne for the Southern Cross Challenge from 16-20 January 2020. The top ten U14 and U15 basketballers from NSW were selected to don the state uniform for the Challenge. The NSW U14 Boys, including Riley Broadhead and Joshua Spark to a strong 3rd place – a fantastic achievement for a team that had never trained together. Milo Fallows represented NSW in the U15 Boys team.

Well done to all our NSW representatives!