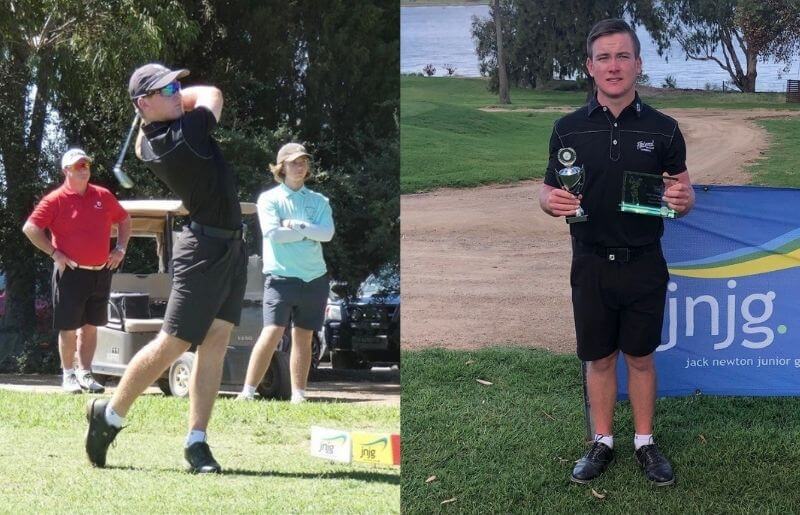 A capacity field has headed to the Riverina for the first JNJG Junior Masters event of the2021, with more than 120 players taking to the famous Lake Albert course including two Illawarra Academy of Sport golfers, Ethan Harvey and Andrew Brown.

Harry Atkinson (Kurri Kurri) led a fired-up field after the opening round of the 2021 Wagga Wagga Junior Masters. Atkinson was bogey free during his round of 5 under par 67 but had an eye over his shoulder as Ethan Harvey (The Lakes GC) sat one shot behind on 4 under par 68. Harvey was 5 under but boggied 17th hole.

After both being unable to save par on the 18th hole and finishing on 7 under, Ethan Harvey (The Lakes GC) and Harry Atkinson (Kurri GC) were headed to a playoff finish. The playoff, however, wrapped up quickly, with Harvey making a birdie on the first to win the tournament.

After missing the same putt for birdie on his opening hole in the morning, Ethan remarked after the playoff “I knew coming up against Harry, that I would need to take my chances, so I knew I had to make this putt”.

Atkinson made the turn in 1 under, while Harvey completed his front 9 at even par. Not only was the 38 degree temperature heating up but so was Harvey, starting his run with birdies on the 11th, 14th, 15th and 16th holes. Atkinson made birdies on 12th and 16th to be tied with Harvey at 8 under.

Atkinson made an easy par on 17, while Harvey made a difficult up and down from over the back of the 17th hole with a 3-metre putt to save par.

“I was so excited to win the event, as it was my first Junior Masters title,” Harvey said.

Andrew Brown finished in a creditable 16th position at 7 over par.