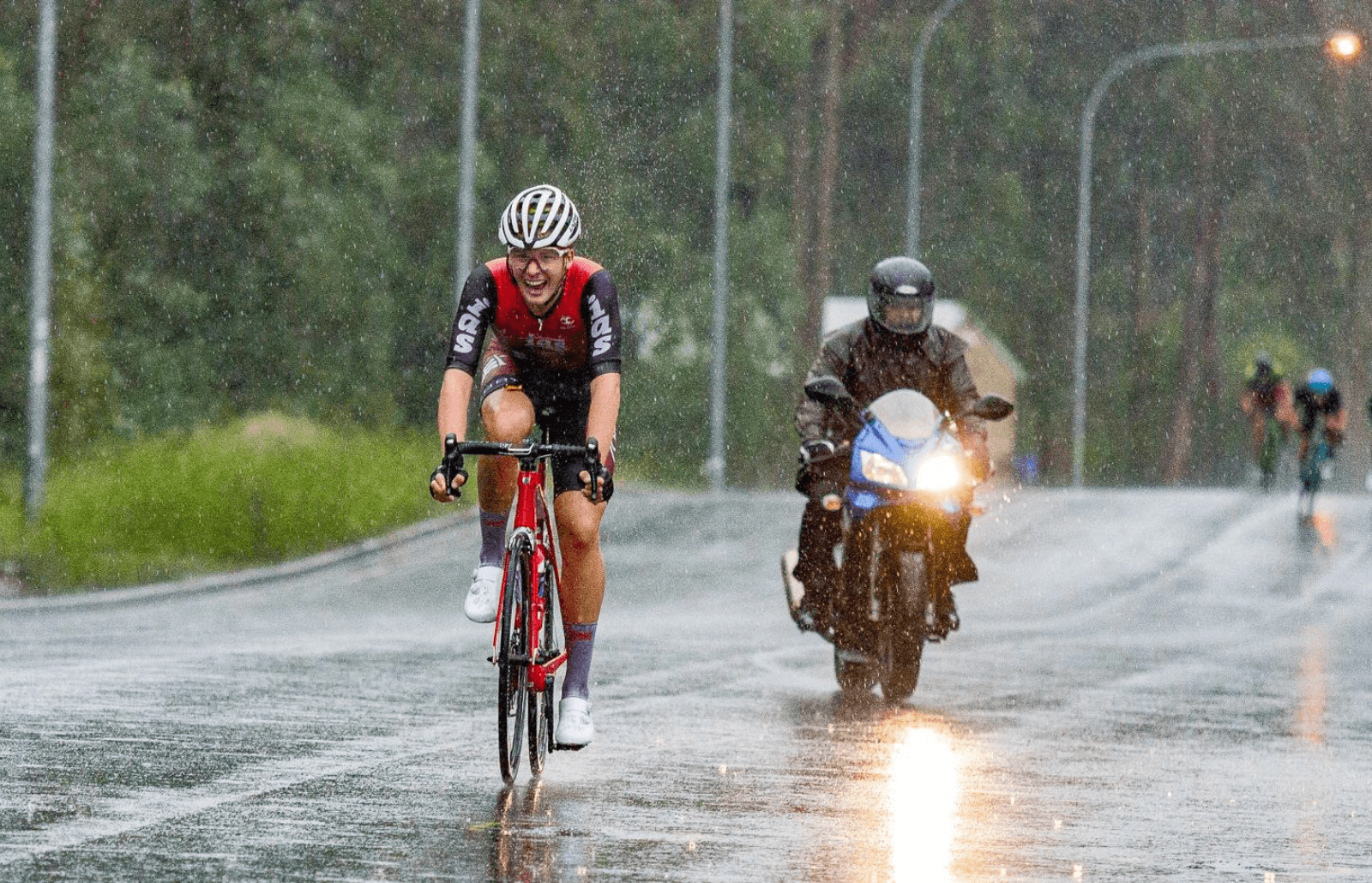 After the long awaited return to racing, the IAS cycling squad turned up in mass to the first state event since racing paused, The Orica Hunter Junior Tour at Kurri Kurri NSW.

The weekend was a three-stage tour, commencing with an individual time-trial followed by a criterium on the Saturday and a road race on the Sunday. The podium was reserved for the GC, (General Classification, being the fastest time overall after summing the three stages). The event was also the first of three races for state team selection for the Junior National Championships.

The IAS was well represented with all cyclists competing in the U17 age category.  The men were represented by; Jonah Hammer, Luke Skelly, Ryan Britten, Curtis Trkulja, Hugh Sessini, Harrisson Johnston, and Jack Harris; and for the women; Sarah Cliff and Emily Strumfin.

Typical of sport, the scoreboard often does not describe the effort and skill each showed over the weekend, especially with the challenging weather.  The course had no mountains and favoured the more powerful rider.  The athletes raced safely in poor conditions and all finished the tour without incident!

The standout performance, was Jonah Hamer’s win in the U17 men’s road race and the support in the breakaway from the bunch by Curtis.

“I was happy to win my first race and being my first big win it’s definitely a confidence booster,” Jonah Hamer said. “COVID has made the season uncertain but I will keep training towards NSW titles and nationals.”

Hamer, Cliff, Britten and the IAS cyclists now prepare for the next  big event, Dooley’s Tour of Sydney and the NSW Criterium Championships  and Country Road Championships in two weeks.

Thanks to Hunter Cycling Club and Cycling NSW for a well organised and safely conducted event, with many new controls implemented by Cycling NSW to responsibly keep all participants safe and reduce the risk of spreading the COVID-19.

The Orica Hunter tour was the first big race back. After track nationals were cancelled there has been a bit of virtual racing but nothing compares to the real thing. I prepared like I normally would and have been training hard. I was quite nervous to see how the weekend would unfold as I haven’t raced the guys in a while.

The morning of the race made everyone nervous to see if they would go ahead in such bad conditions but the rain eased slightly and we got the go ahead to race. Our first lap of the race was neutral for safety and so we could all see the course and if there were any large puddles to watch out for. On the second lap there were multiple attacks that I tried to get into but we were caught quite quickly.

On the third lap Curtis Trkulja (IAS), Brayden Bloch (Randwick Botany) and myself got a small gap that we held for just less than half a lap then we were caught. On the fourth lap there were more attacks, some from others and myself trying to get away solo but nothing would stick so we were all together with one lap to go.

Coming up to the last lap to go I didn’t attack but went to the right hand side of the road and picked up the pace but the bunch behind did not accelerate with me so I got a small gap and I accelerated up the hill getting a bigger gap and got the bell for one lap to go. At the top of the hill I had 20 seconds on the bunch so I just kept going, I kept looking back on the way out to the turn around to see where the bunch was and if they were chasing me but I could just see the lights of the follow cars behind them. I got into a tempo and just stuck to the pace I thought I could hold for the rest of the race. At the turn around I got to see how close the bunch was so I picked up my pace for a while because I thought they were getting really close.

In the last two kms I really was trying hard to keep my gap, especially around  the last turnaround which is about 1km from the finish so I went all out of the final hill and coming to the line I was really happy that I had won my first race.

The conditions made it a bit difficult to see and there was constant water coming off the wheels in front of you. Apart from that  I liked the conditions and racing in the rain. I feel like it made the racing more fun.