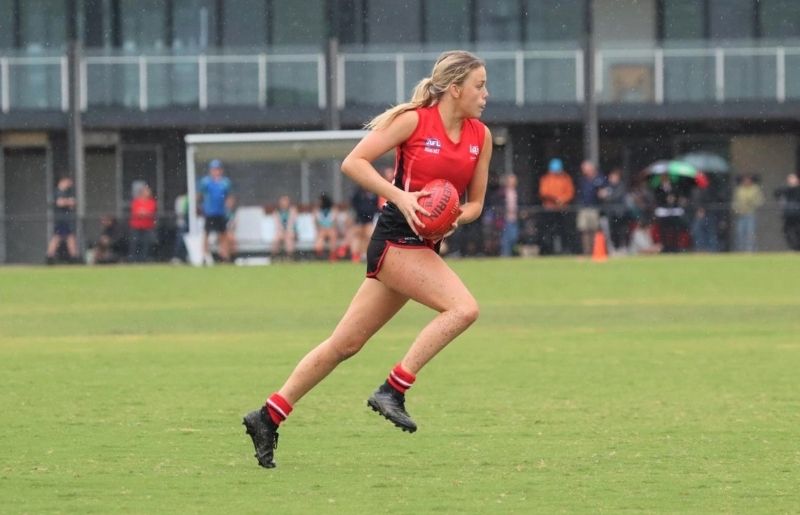 It was a successful year for the 2020-21 AFL Girls, with both U17s and U19s teams making the finals at the Your Local Club Academy Games. Led by Head Coach Lee Murray, the AFL athletes have grown and developed markedly, with one third of this year’s squad selected for higher honours in the Sydney Swans Academy or for NSW teams.

Congratulations to Ivy Halliwell, the 2020-21 AFL Girls Athlete of the Year!

Ivy Halliwell has established herself as a player to watch in the future after an impressive past 12 months. Ivy was a standout performer for the IAS at the 2021 Your Local Club Academy Games, playing for both the U17s and U19s teams in all eight games during the weekend.

Ivy was selected into into the Sydney Swans Under 17s Top End AFL team as a bottom age athlete, where she impressed in matches against the GWS Giants. Ivy was recently selected into the U16 Girls Sydney Swans Super 24 Talent series team, although the event did not go ahead due to the COVID restrictions.

The future Sydney Swans AFLW star, also competed for the undefeated Illawarra Storm representative team and now has her sights set of playing in the AFLW in the future.

“I want to follow the lead of other AFLW players, trailblazing their way through competitions and challenge myself to be a proud Illawarra representative in the AFLW playing for the Swans,” Halliwell said.

This year’s AFL Girls runner-up was Nellie Hicks. Nellie has been an exceptional IAS athlete on and off the field. She was captain of the IAS Girls squad, continually exhibiting sportsmanship and leadership. Nellie was selected in the Sydney Swans Under 19s Top End squad and represented the Swans in the NAB League.

Congratulations to Ivy, Nellie and the AFL Girls on a fantastic year!