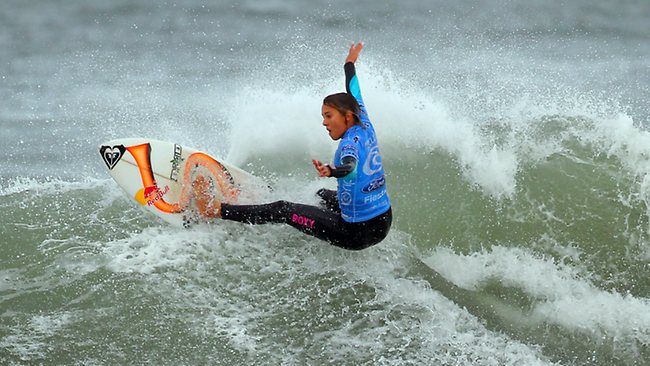 ALMOST two years after her last win and in the wake of the worst season of her career, Sally Fitzgibbons is back on top of the world.

Lonely morning surf sessions in the dark, a relentless fitness campaign and the desire to prove she can still be a force in world surfing delivered Fitzgibbons an emotional victory in the Margaret River Pro.

“I had that little private movement out there to enjoy it, to savour it,” Fitzgibbons said

“I just laid back on my board and went, wow. All that hard work has paid off. The reward has come. It’s a big relief.

“I am so, so stoked. That was amazing. It’s feels great to be back.”

In an extraordinary march to victory, the 26-year-old pro surfer and business entrepreneur took down three world champions — including reigning titleholder Tyler Wright — in a row for her first world tour win since the Fiji Pro back in 2015 which she won with a broken ear drum.

Fitzgibbons beat triple world champion Carissa Moore from Hawaii in the quarters and then Gilmore, winner of the Roxy Pro last month, in the semis to advance into the finals of the second round of the world tour.

The result has put her into the equal lead in the world title race with six-time champion and fellow Australian Stephanie Gilmore.

First published in the Daily Telegraph on 10th April 2017

Will Miller, an IAS Graduate and former Australian 7’s player, has switched his focus back to 15’s and captained Norths to their first premiership in 41 years last year.

Miller started at No.7 for the Rebels against the Sharks in Durban at the weekend and played a big role in securing a share of the points for the Melburnians in a 9-all draw.

Stepping up comfortably in a 72-minute effort, the 24-year-old made three steals, forced another ruck penalty and held up Tendai “Beast” Mtawarira to deny the hosts a try. Miller’s debut was described as one of the only bright spots in an otherwise dire weekend for Australian rugby.

First published in the Daily Telegraph on 25th April 2017

IAS graduate and Olympic gold medalist Emma McKeon has set herself a huge challenge for the World Championships in Budapest in July with a twelve-race schedule in just eight days.

McKeon’s excellence has been the constant theme during the first three days of the national trials in Brisbane as she has qualified to swim the 100m freestyle, 100m butterfly and now 200m freestyle at the world titles.

Those three individual places also ensure she will be a key member of Australia’s three relay teams, giving her a schedule of six events. It is the biggest program she has undertaken at a major championship but she is eager to tackle it.

“I’m not worried about it, I’m more excited about it than anything,’’ she said after qualifying.

“All the top girls I looked up to when I was growing up (Susie O’Neill, Libby Trickett, Alicia Coutts), they all had massive programs and were part of all the relays as well, so that shows it can definitely be done, and I’m excited by it.’’

“Backing up race after race makes me a tougher competitor and a tougher person as well.’’

McKeon, 22, was Australia’s most decorated athlete at the Rio Olympics, winning one gold, two silvers and a bronze medal, but her campaign there was not without disappointment.

She swam a poor 100m butterfly final but bounced back to win the bronze medal in the 200m freestyle, and she said that was a huge learning experience.

“I feel like I’ve definitely become a more resilient athlete, not only in competition but in training as well,’’ she said.

McKeon was a class above the field in the 200m freestyle final as she clocked the second-fastest time in the world this year, 1min 55.68sec.

“It’s a bit hard getting out there and doing a quick time when you’re swimming it by yourself,’’ she said.

“But I’m pretty happy with that time and just to get out and do some high-quality racing to get ready for a big program over in Europe.’’

First published in The Australian on 12th April 2017