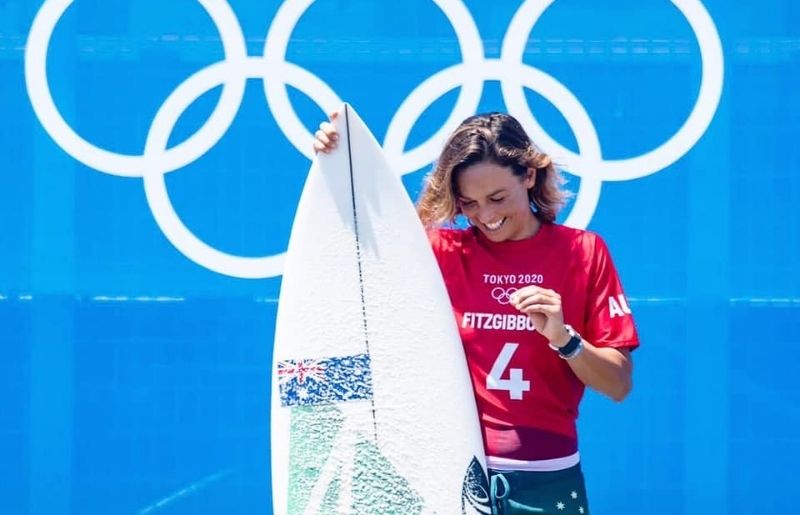 Sally Fitzgibbons makes history as she contests the first Olympic surfing competition, making the women’s quarterfinals in the process.

Sally, a true ambassador to the sport of surfing, has done not only her hometown of Gerroa and the South Coast proud but the entire country.

Fitzgibbons was an Illawarra Academy of Sport Individual Program Athlete (IAP) as a teen, winning the DRB Group Tobin Family Award in back-to-back in 2006 and 2007. Since then she has built an impressive surfing resume, including being three-time International Surfing Association (ISA) World Surfing Games champion and  world number one.

Competing in the Olympics was a long-time dream of Fitzgibbons after being a high-level runner in her youth, and winning gold in the 1500m and 800m at the 2007 Youth Olympic Games. To make that dream a reality in her professional sport of surfing is nothing short of amazing.

“It’s something that I’ll always remember being the first surfing Olympians and hopefully it goes from strength to strength,” Fitzgibbons told the Seven Network. “Our sport is here to stay!”

Having an impressive start her 2020 Tokyo Olympic Games campaign Fitzgibbons won her first heat with a score of 12.50 to advance straight to Round 3.

Fitzgibbons went on to beat France’s Pauline Ado 10.86 to 9.03 in Round 3 to progress to the quarterfinals.

The quarterfinal proved the uncertain nature of surfing, with Sally battling against not only her opponent, Amuro Tsuzuki but also the unpredictable ocean in tough weather conditions. After Fitzgibbons put up a strong fight, Japan’s Tsuzuki made the most of her home beach advantage to prevail 13.27 to 11.67 and progress on to the semi-finals.

“It hurt so bad, this one is probably the toughest loss of my career,” Fitzgibbons said in her interview after the quarterfinal.

“I wanted to do it so bad for my team mates and my country. I had the best time out there, I fought my hardest and it just wasn’t my day. My heart’s just shattered.”

Despite going down in the quarters, Fitzgibbons is hungry to make the next Olympics.

“I did my absolute best out there, I’ll bring myself back up and I’ll go again,” Fitzgibbons said. “I’m going to work really hard and hopefully see you all in Paris 2024.”

Congratulations on your Olympic debut Sal, we are so proud of you and the inspiration you are!