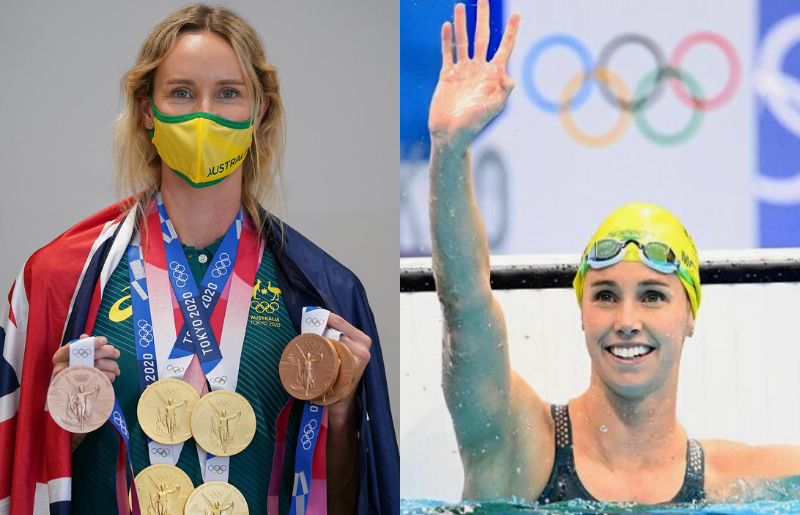 The humble, unassuming girl from the Gong has become Australia’s Golden Girl after becoming the country’s most successful Olympian in history. IAS alumni and 2010 Tobin Award winner, Emma McKeon came away from the Tokyo 2020 Olympics with an outstanding seven medals from seven events, including four gold all in record times and three bronze.

This unbelievable feat means McKeon is now the most decorated Olympian in Australian history.

McKeon’s four gold medals in Tokyo sets a new Australian record for most golds in a single Games, eclipsing Ian Thorpe’s three. She also sets the record for the most medals ever won by any Australian athlete with her seven Tokyo medals combined with her four from Rio bringing her total to eleven Olympic medals in just two Games. This puts her well above Ian Thorpe and Leisel Jones, who are both tied on nine.

“To be in that kind of company, it’s an honour,” McKeon said to Network Seven in Tokyo. “I know that I’ve worked hard for it.”

McKeon not only set records for the Australian Olympic team but also is the equal most decorated female athlete of any description from any country at a single Olympic Games, matching the record set by Soviet gymnast Maria Gorokhovskaya in 1952.

Highly respected by teammates and competitors, McKeon’s dedication, work ethic and commitment in Tokyo was nothing short of phenomenal.

McKeon commenced her 2020 Olympics campaign by showing her competition that she meant business in Tokyo, setting a new Oceania and Australian record of 55.82 seconds in the 100m Butterfly heat.

The next morning, she won her first gold of the week in the 4x100m Freestyle Relay as the Australians set a new World Record of 3:29.69 to be the first relay team ever to go under 3:30. McKeon recorded the 5th fastest split in history of 51.35 seconds.

Medal two came a day later when McKeon claimed bronze in the 100m Butterfly, lowering her PB and the Oceania and Australian records to 55.72.

In her trademark relaxed, unassuming nature McKeon casually set a new the Olympic record of 52.13 in the 100m Freestyle heat, then sailed through the semi finals to qualify fastest for the final.

McKeon joined the Australia 4x200m Freestyle Relay team in a remarkable race where the top three teams all beat the previous world record time. The Australians narrowly finished in third place to win bronze, setting a new Commonwealth and Australian record of 7:41.29.

On Friday 30 July, McKeon won her maiden Olympic gold medal in the 100m Freestyle. Again, Emma improved on the previous performance and set a new Olympic, Commonwealth and Australian record of 51.96.

McKeon’s form continued that night, setting another Olympic record in the 50m Freestyle heat (24.02), and again the next morning in the semi-final (24.00).

The tough schedule meant she had a mere six minutes between her 50m Free semi and the 4x100m Mixed Medley Relay. McKeon powered the Australians to bronze after swimming a sizzling anchor leg to hold out American powerhouse Caeleb Dressel. The bronze secured McKeon’s fifth medal at Tokyo and elevated her to be Australia’s equal most decorated Olympian.

McKeon started the final day of the Tokyo swimming program with her last individual event, the 50m Freestyle. Setting yet another Olympic record in the process, McKeon won the 50m Free in 23.81 seconds, becoming just the fourth female swimmer in history to take the 50m and 100m Freestyle golden double.

Less than an hour later, the 4x100m Medley Relay team won McKeon’s seventh medal as the girls powered home to win in 3:51.60 setting another Olympic and Commonwealth Record.

Sunday 1 August – a day to remembered as Australia’s biggest gold medal day in history and the day Emma McKeon cemented her status as the Greatest of All Time.

A phenomenal Olympic campaign by the humble swimmer to win a staggering 4 gold and 3 bronze medals.

“Emma McKeon is not only a fantastic swimmer, but a true champion, role model and ambassador to all Australians,” IAS CEO John Armstrong said. “She is the perfect example of the values the Illawarra Academy of Sport aspires to instil in our athletes. A truly remarkable achievement, the IAS and entire community are so proud Emma!”