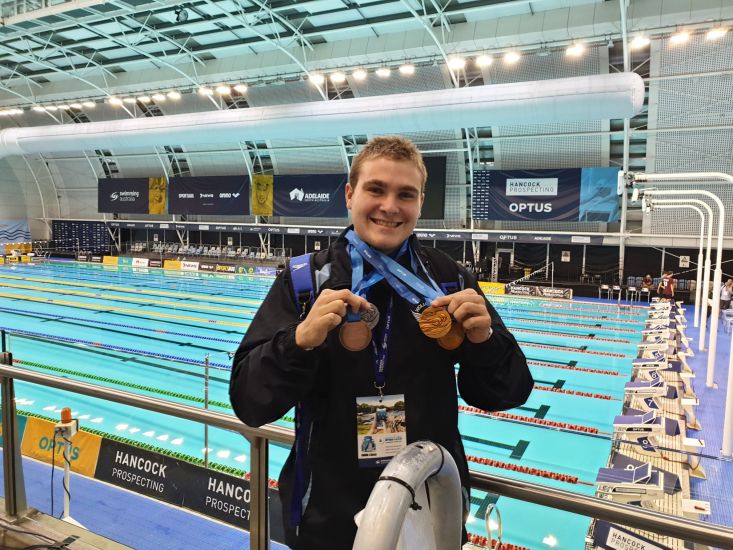 Jarrod and Tarren Dyer spent the majority of April in Adelaide competing in the National Open and Age Swimming Championships. The brothers started off at the Hancock Prospecting Australian Swimming Championships from 4-12 April competing in the Open Multi-class category. Jarrod competed in 9 events throughout the Championships making it through to the final in 50m Fly (4th), 50m Breaststroke, 50m Back and 50m Free. Tarren achieved a PB in both his events, the 50m Free and 100m Free.

The action didn’t stop there for Jarrod with the Australian Age Swimming Championships running from 15-22 April. Jarrod competed in another 9 events in the Boy 17-18 Multi-class, coming away with outstanding results and nine medals! Jarrod swam blistering times to achieve Gold in the 100m Freestyle and 50m Butterfly; Silver in the 50m Freestyle, 50m Breaststroke, 100m Butterfly, and 200m Individual Medley; and took Bronze in the 50m Backstroke, 100m Breaststroke, and 100m Backstroke.

Following his success throughout the Australian Open and Age Swimming Championships, Jarrod was selected in the Swimming NSW Para Potential Squad.

The IAS was well represented in other events at the Australian Age Swimming Championships with Chelsea Jones, Jade Van Duin and Bailey Crehan all making the finals in multiple events. Chelsea Jones, competing for Wests Illawarra, earnt a Silver Medal in the 14 Girls 50m Freestyle Relay. Chelsea and Jade teamed up for Wests in the 14 Girls 50m Medley Relay finishing in 4th, narrowly missing out on the podium. Following the Australian Age Championships Swimming NSW has announced an emerging talented athlete squad to provide support, education, skill development and exposure to prepare athletes for the National Junior Teams and/or Talent Identification Squads. All three IAS National Finalists have been selected in to the Swimming NSW’s Sharks Squads, with Chelsea Jones selected for the Sharks Gold Squad, Jade Van Duin and Bailey Crehan named in the Sharks Silver Squad.

After returning on a high from Nationals, the swimmers attended the NSW All Schools Swimminging Championships. Chelsea Jones led the way and finished with three gold and one silver across the freestyle events. Zara Sharman, Jarrod Dyer, Jade van Duin, Bailey Crehan and Clint Ridding all swam well to proudly come away with medals and gain selection into the NSW team to compete at National All Schools Championships in Melbourne in July.