AFL Girls show the Regional Academies what they are made of 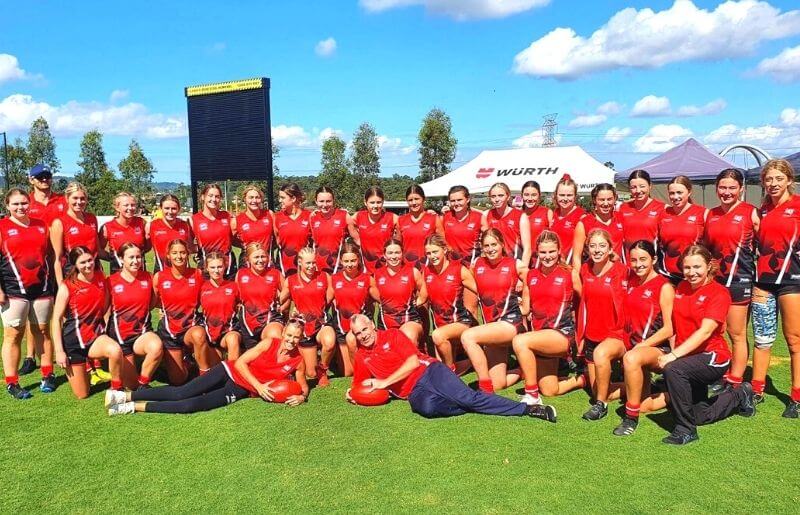 The AFL Girls squad had unfinished business after not being able to compete in 2020 due to COVID-19. After finishing 5th at their first Your Local Club Academy Games in 2019, the girls were determined to go out against the other Regional Academies and show their dramatic improvement over the past two years.

Highlighting the growth in the sport, the Illawarra Academy of Sport sent both an U16s and U18s team to compete in the 2021 Your Local Club Academy Games.

The U16s started off the weekend with a solid 32-19 win over SWSAS/NCAS.

“During the game we really started to work together and become a stronger and more competitive team in the competition,” Ellecia Brooks from the IAS U16s said.

The girls backed up their first win with an impressive 34-0 win over CCAS/WRAS in difficult rainy conditions.

“We took a little while to find our groove but then we went on and won the game which was great” U16s player, Sarah Eagleton said.

The U16s unfortunately went down to a strong SESA side, before finishing the rounds with a 19-6 win over HAS. After the three wins and one loss, the U16s finished 3rd.

The U18s started the weekend in tough, wet conditions with a loss to SESA before coming back stronger with a 27-6 win over CCAS/NCAS.

“Against SESA we didn’t really play how we normally would and didn’t get our groove until our second game,” IAS Captain, Dakota Mason said. “The second game against CCAS/NCAS we performed how we should – to the best of our ability and came out with the win. “

The U18s finished the rounds with a nail-biting one-point loss to HAS/WRAS. The U18s qualified for the bronze medal match against CCAS/NCAS and rose to the occasion taking the bronze medal and win 25-20.

Head Coach, Lee Murray was impressed with the effort his teams put out.

“We have a great crop of athletes,” Lee Murray said. “There was a bit of polishing on this rough diamond but we were on track and showed the other Academies what we are made of.”

View all the action from AFL here.